It used to be a picture of a happy family for Pham Quoc Viet, 10, four years ago when he was embraced in the arms of his parents. Although life was tough, Viet grew up cheerfully like any other boy of his age as long as he lived in the love of his parents. His life was changed since a horrendous accident happened to Viet’s father. “His father went fishing at a nearby ditch on a morning. He carried an electric tool which unfortunately gave him an electric shock and took away his life”, said Viet’s grandfather Mr. Pham Van Tich, 60. After one year and a half, Viet’s mother remarried and left him to Mr. Tich who loves him as much as his parents and is raising him. 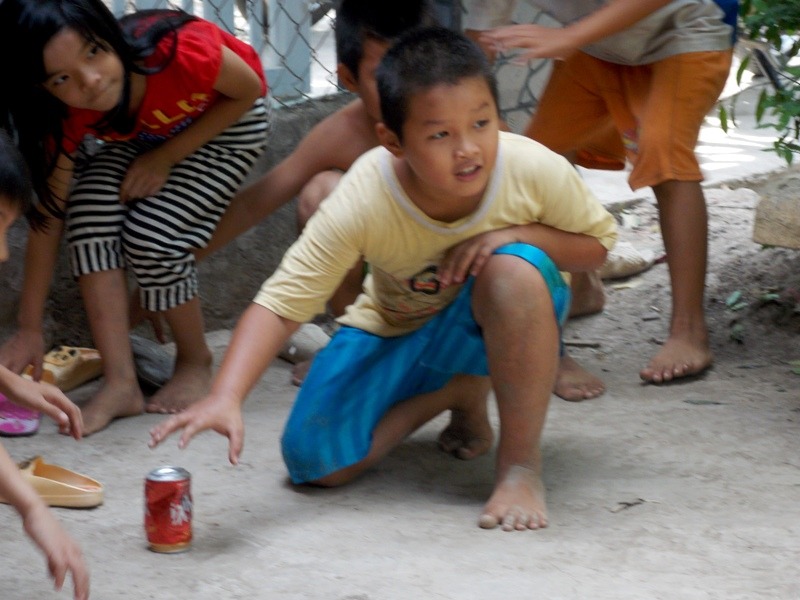 Viet playing with his friend

Mr. Tich works as a build worker for an income of 150,000VND (about US$ 7) per day. When there is no construction work or a construction is far from home, Mr. Tich does carrying in a market for an income of 50,000 VND (about US$ 2) per day. His day starts at 4am. After preparing breakfast and doing some housework such as washing clothes, Mr. Tich takes Viet to school and drives 6 km to work. He picks up Viet at 11.30am for lunch and takes him back to school at 12.45pm. Viet leaves school at 4.30 with his friend as Mr. Tich stays at work until 5pm. “Viet used to walk home after class; however, since he was hit by a motorbike two years ago, I asked my neighbor to help pick him up”, shared Mr. Tich.
The meager income is usually sufficient for basic necessity. Sometimes the family has charity rice or spices doled out by a pagoda. Their meals are simple with fried egg or spoiled egg and rice or instant noodle. Soups are sporadically given by a kind neighbor.
As Mr. Tich has suffered from stomach ulcer for 6 years, he usually takes medicine to relieve the pain. “I can’t afford to go seeing a doctor. I once was hospitalized for 1 month, which cost a great deal. I could have incurred to debt if it hadn’t been thanks to my kindhearted neighbors”. Although the family was supported by the social insurance for low income family, Mr. Tich didn’t receive reimbursement for the treatment back then.
Viet in grade 4 has been a pride of Mr. Tich. “He really wants to go to school. He has tried much to have good grades. I often tell him before sleep that it is only education can give him a better future and that how struggling I am without education. Every time he promises me to keep learning, he gives me more strength to try for us both”, said Mr. Tich. 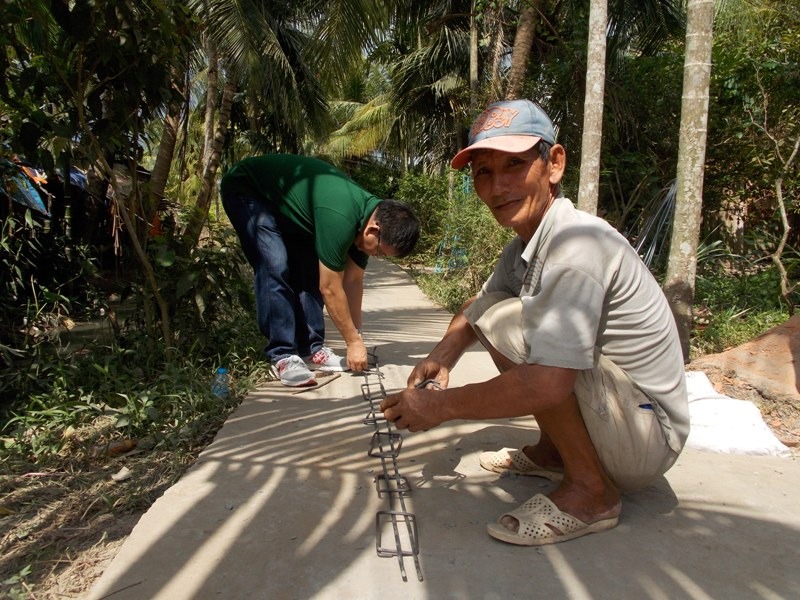 It is a shoulder relief for Mr. Tich if the school supports Viet with his tuition; otherwise, Mr. Tich has to pay 500,000 VND (US$ 24) for two semesters. Due to good performance at school, Viet also gains rewards which are studying materials.
It was a shame that Viet didn’t have an appropriate place for studying at home. Bed is where he studies and lightened with a bulb. Whenever it rained, the leaking roof made of asbestos sheets led rain water coming in and wetting the house. Viet used tarpaulin to cover his books; still, some could get wet if the rain was too much. The soil ground floor became damp due to splashing rain finding its way through the thatch walls. “Viet and I had to huddle in a dry corner waiting for the rain to stop and get back to sleep at night”, Mr. Tich relived the memory. As most of the house made of temporary construction materials, it was almost collapsed under a whirlwind. The house had no toilet and the family asked their neighbor for sharing. In the picture, Mr. Tich joined the volunteers to help repair his house.
When being asked if he could build a home on his own, Mr. Tich said “It was impossible”. That’s why he was happily surprised as hearing that volunteers would come to help build a home for Viet and him. Despite his fatigue due to hot weather, Mr. Tich built alongside the volunteers and helped them when needed. “I can’t say thank-you enough to the volunteers. It is because of them, my grandson and I can have a decent home to live”, said Mr. Tich. 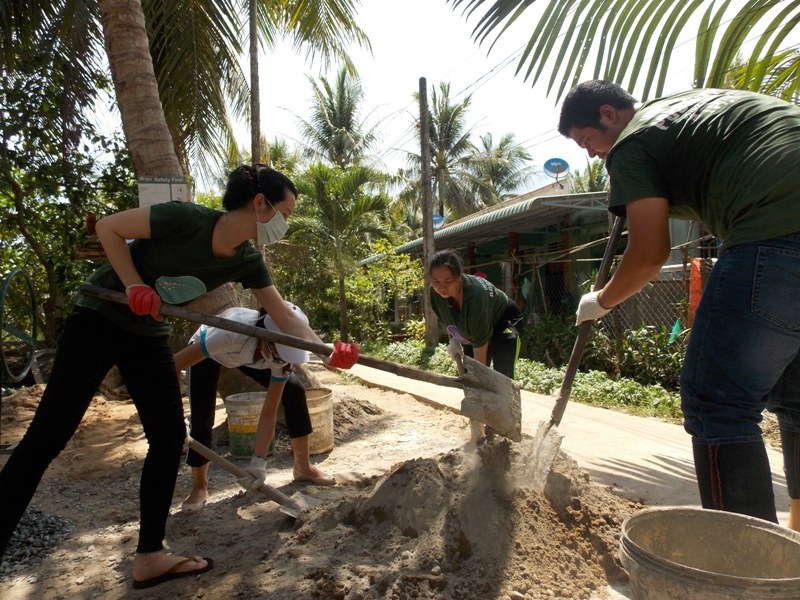 Mr. Tich is pleased that no more money will be spent on house repairs; instead, he can use that to support Viet’s studying. “I wish he can study as high as he can”, shared Mr. Tich. As Viet also promised that to the volunteers, we believe that Viet can make it happen.