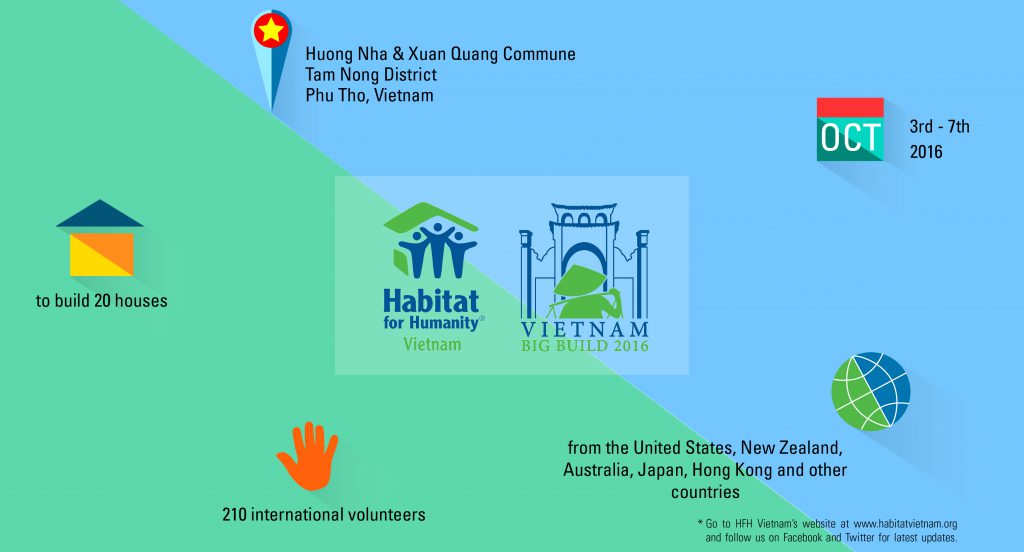 More than 200 international volunteers to build 20 homes for families in need
HO CHI MINH CITY (Sept. 19, 2016) ─ More than 200 international volunteers from Japan, Singapore, New Zealand, Australia, Hong Kong and the U.S., will be working alongside 20 Vietnamese families to build decent homes during a week-long special build from Oct. 3 to 7 in Tam Nong district, Phu Tho province.
The Vietnam Big Build will welcome volunteers, future homeowners, donors, and representatives from the national and local governments as well as the U.S. Embassy to an opening ceremony on Oct. 2 at the King Hung’s Temple. Guests include representatives of the Vietnam Union of Friendship Organization, People’s Aid Coordinating Committee and Phu Tho Provincial People’s Committee; Susan Sutton, Deputy Chief of Mission from the US Embassy; representatives from Metlife Foundation and Rick Hathaway, Vice President, Asia-Pacific, Habitat for Humanity.
Kelly Koch, country director, Habitat for Humanity Vietnam, said: “In 2013, we have had a successful Big Build in the Mekong Delta attracting 197 volunteers. Through decent homes, families were able to build a better life for themselves. This year, we look forward to working with families in Phu Tho to build strength, stability, self-reliance and shelter.”
To mark World Habitat Day on Oct. 3, Habitat volunteers will join the rest of the world in recognizing the basic right of everyone to adequate shelter. The need for decent housing is great for families in Phu Tho, one of the poorest provinces that is also prone to annual flooding. Future homeowner Tran Thi Vinh for example, had no answer when her son asked her husband who is a construction worker, “Why do you only build other people’s houses? What about our own house?” Vinh said: “Although we work hard every day, a decent home is a distant dream. My children are getting excited because we are going to have a new house of our own, thanks to Habitat Vietnam and their supporters.”
Habitat Vietnam’s partners for the Big Build include Vietnam Union of Friendship Organization and the People’s Aid Coordinating Committee. Sponsors include Habitat for Humanity New Zealand, Thrivent Worldwide, Habitat Affiliates in the U.S., Metlife Foundation, Habitat for Humanity Hong Kong, and Rajinder Kaur.
Notes to editor
To set up interviews, receive photographer or for further information, please contact Thanh, +84 (0) 909 788 002, thanh.nguyen@habitatvietnam.org.
About Habitat for Humanity Vietnam
Habitat for Humanity Vietnam, a branch office of Habitat for Humanity International, began operations in 2001 in Danang in the central coastal region of the country. Habitat Vietnam works with low-income families in new house construction, home repairs, improving their access to clean water and safe sanitation and technical assistance as well as enabling them to obtain secure tenure. Currently, Habitat Vietnam is present in Hoa Binh, Thai Nguyen, Phu Tho, Thai Binh provinces in the north; Quang Nam province in the central region; and Dong Thap, Long An, Tien Giang, Ba Ria-Vung Tau provinces in the south. Habitat Vietnam has also launched disaster response projects in Phu Tho, Dong Thap and Quang Nam provinces. Visit habitatvietnam.org or connect with us via https://www.facebook.com/HFHVietnam/
About Habitat for Humanity International
Driven by the vision that everyone needs a decent place to live, Habitat for Humanity began in 1976 as a grassroots effort on a community farm in southern Georgia. The Christian housing organization has since grown to become a leading global nonprofit working in nearly 1,400 communities throughout the U.S. and in nearly 70 countries. Families and individuals in need of a hand up partner with Habitat for Humanity to build or improve a place they can call home. Habitat homeowners help build their own homes alongside volunteers and pay an affordable mortgage. Through financial support, volunteering or adding a voice to support affordable housing, everyone can help families achieve the strength, stability and self-reliance they need to build better lives for themselves. Through shelter, we empower.
Habitat has supported an estimated 2 million individuals in the Asia-Pacific region, where it has been active since 1983. To get more information, to donate or to volunteer, please visit
habitat.org/asiapacific or follow us at facebook.com/habitat.