Habitat for Humanity’s largest youth-driven campaign Young Leaders Build takes place for the fifth year in the Asia-Pacific region. Formerly known as “Habitat Youth Build”, the campaign encourages young people to volunteer, fundraise and speak out for the need for decent homes as a way out of poverty and toward self-reliance. Events include hands-on participation in home construction, fun runs, road shows, workshops, seminars, fundraising activities, advocacy grant awards and social media activities such as an online flag design design and vote contest and a twitter party. About one million supporters are expected to take part this year in a campaign spanning 17 countries and Hong Kong. Habitat Young Leaders build launch in December 2015 and ends April 2015 with culmination events planned across the region on 2 April. 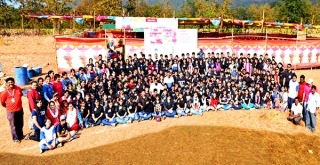 Country specific activities planned across the Asia-Pacific region include:
Bangladesh – Habitat conducted a two-day workshop with architecture students to give them instruction on low cost housing. Additional events are being planned for next month.
Cambodia – This year there will be road shows, where Habitat representatives, notable speakers and volunteers will visit universities and schools. This popular event is returning for another year, and will gather students in venues, and lead discussions about housing advocacy themes. The road show will target 1,500 volunteers. Attending youth will learn about advocacy, and about Habitat’s “Solid Ground” campaign. Celebrity singer Laura Mam will participate. A mass volunteer build will take place on 30 April.
China – Plans are underway for 150 volunteers to participate in a house building event in Guangdongfrom  25 – 27 March. At another Habitat build site in Yunnan, 90 student volunteers will undertake house construction work. A workshop on housing issues and fundraising for 50 young leaders will be held in Shanghai.
Hong Kong – An earlier event in December marking the launch of the Young Leaders Build campaign had 150 student volunteers cleaning the houses of senior citizens. For the culmination event in April, there will be renovations and repairs for seniors’ homes. Ambassadors participating this year include Cantopop singers Wilfred Lau and Kay Tse.
Japan – A fashion show launch event was held in December with 130 youth attending. A commemorative event was held for the rebuilding of Tohoku, with youth volunteers visiting the site of the Great East Japan Earthquake to see the progress that has happened in the area over the past five years. Looking ahead, a build event is being planned at a shelter for battered women, and will include advocacy for students. A marathon is planned at the Imperial Palace Park in Tokyo, about 200 students have signed up for the March 21 marathon relay. There are 33 campus chapters in Japan, and 35 Global Village teams planned for trips abroad this year, up from 25 teams last year. Youth volunteers also continue to organize futsal games to fundraise for build projects in Indonesia. Habitat volunteer and supermodel Arisa Kamada is helping to build houses in India. 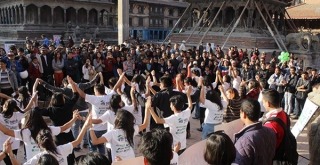 Korea – Volunteer youth in Habitat Global Village teams will travel to other countries in the region to build. Forty students are supporting a furniture making program to help handicapped children that are living with seniors. Film and TV actor Lee Chun Hee is encouraging the youth to participate in a handwritten letter and social media campaign to advocate for issues, including housing. A popular cookie decorating workshop is planned. House-shaped cookies from the fundraising event  will be donated to Habitat home partners. A post-campaign video competition will also be held.
India – Activities for Young Leaders Build this year include conducting school-based awareness raising activities, and competitions to teach students about sanitation, health and hygiene, as well as the need for decent homes. Habitat will also be hosting various Global Village volunteer teams.
Indonesia – Forty school groups will participate in various events this year. School road shows are planned to hold discussions on housing issues. 150-200 students from 10 schools are expected to help build at least five homes on April 2. Singer-songwriter vanessaTM , who composed and performed the  HYLB theme song “Start the Fire”, will appear on a radio talk show and roadshows to speak on housing issues. Another long time Habitat ambassador Whulandary Herman, Miss Universe-Indonesia 2013, will support the campaign.
Nepal – Their launch event was held with the Nepal Scouts and representatives of the US Embassy. This year’s theme is “Young leaders building Nepal for decent homes and sustainable communities.” There will be awareness raising activities supported by Habitat’s partners such as the Nepal Scouts. Governmental support comes from the ministry of youth and sports . There will be house builds with two visiting Habitat Global Village teams. A flash mob event for housing awareness was held on Valentine’s Day, with another planned for World Water Day. Culmination events are being planned for 3 May. Nepali youth ambassadors include actress Anna Sharma, VJ Sanjay Gupta, Scout leader Prakash Pandi and presenter-model Ayushman Desraj Shrestha Joshi.
Philippines – Youth leaders from Habitat Philippines campus chapters attended a consultation with the United Nations Major Group for Children and Youth to voice their thoughts on housing issues in the country and globally, as part of the input for the Habitat III summit which will be held this October in Quito, Ecuador. Several events are planned in the coming weeks. There will be a fun run fundraiser called “Run for Humanity.” This will target 6,000 runners. For the main event, Habitat will coordinate with the Department of Education to organize students to clean their schools. Another clean-up event is being planned following the May presidential elections where will clean uplocal schools which serve as voting stations. A week long ‘School Brigade’ activity is planned through the Department of Education and campus chapters. Hundreds of thousands volunteers are expected to participate in the school clean-up events. Activities include school painting, refurbishment of classrooms and general cleaning. For the house building events on 2 April, this year’s target is for 250,000 students to volunteer to participate. Visiting Global Village teams will also arrive for build events. 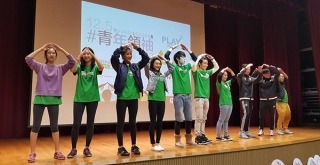 Singapore – The December kickoff had campus chapters traveling to Indonesia and India to participate in Habitat Global Village builds. Additional home works projects are being planned, including an exhibition on poverty.
Thailand – An innovative build event outside Bangkok aims for 120 – 200 student volunteers. These will be international students and Thai students working together. This will involve Habitat for Humanity student clubs. Visiting Habitat Global Village teams will also support the building event. Online petitions will be posted on social media, with a goal of 5,000 posts. Media students will volunteer to produce videos for housing. Architecture students will produce redesigned furniture to benefit families. A T-shirt design contest is also being held.
Vietnam – A build event is planned for the culmination event on 2 April that will target 200 volunteers. Students from international schools and universities will participate, including a study abroad group from Loyola University.
As part of its larger global 2016 partnership, Samsung supports the Habitat for Humanity Young Leaders Build as its first Platinum sponsor, through projects in China, Hong Kong, India and the Philippines.
Across the Asia-Pacific region, a total of 67 Habitat Global Village teams will be traveling to other countries to support build events in various communities. A video featuring celebrity ambassadors from around the region is being produced to encourage volunteers to join.
The first grantees of the regional call for advocacy proposals are also expected to begin implementing their projects in March. A second group of grantees is also expected to be announced within the month. Habitat, together with media partner AsianNGO, will ramp up the conversation around the value of a home and the issue of poverty housing on social media through a Twitter Party, 12 noon Manila time on March 18 (GMT+8).
Additional events across the region are being planned. For updates, visit the Habitat Young Leaders Build Facebook page and follow @HabitatYLB on Twitter and Instagram. Keep up to date with the campaign using the hashtag #HabitatYLB. Supporters are encouraged to share their photos and comments on their social media channels using the same hashtag #HabitatYLB.