Vo Thi Sau and her family have lived through an onslaught of typhoons, year-round rainstorms and massive flooding in rural Quang Nam Province on Vietnam’s south central coast.
Sau is a rice farmer, and her husband, Nguyen Van Phu, cuts grass to earn US$2.40 a day.
The family has always been poor, Sau said. “Our most valuable assets are our two hands.”
In 2006, Typhoon Xangsane destroyed the family’s home. Unable to afford the cost of rebuilding a proper home, Sau and Phu used bamboo, wood and metal roofing sheets to build a rickety, makeshift shelter in Que Luu commune. The structure had gaping holes on all sides, which left them vulnerable to the elements, and it didn’t last long. 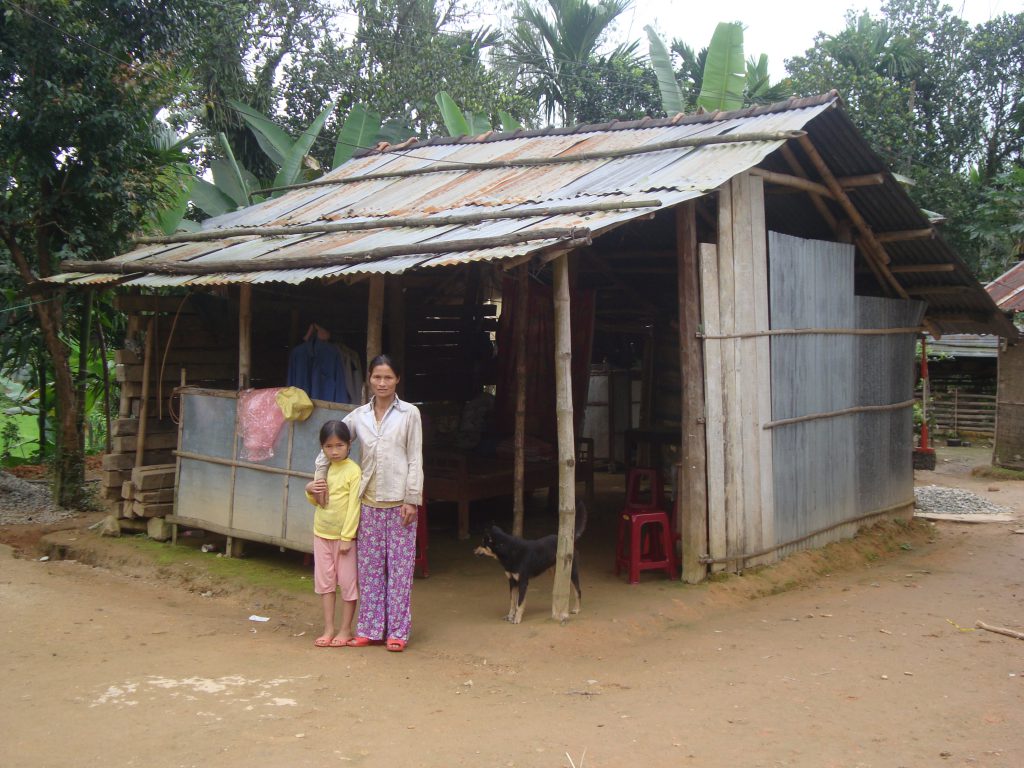 In March 2011, Vo Thi Sau and Kim Huyen stand in front of the makeshift structure the family built to live in

after a typhoon destroyed their first home. Photo courtesy of Lê Văn Doan

Typhoon Ketsana struck in 2009. Wind gusts estimated at 127 mph ripped off the metal roof and left the family even more physically at risk and emotionally distraught.
“Because of what my family had been through, I found it difficult not to panic during a storm,” Sau said. All she could think about, she said through tears, was, “How can I escape this nightmare?”
‘There is new light in my life’
Sau worried that she could never provide a safe, decent house for her daughters: My Trinh, 17, and Kim Huyen, 10. Then she heard about Habitat for Humanity Vietnam’s plans to help rebuild after Ketsana, which destroyed, damaged or flooded more than 294,000 homes in eight Vietnamese provinces.
Habitat Vietnam supplied roofing materials, helped with repairs and renovations, and instructed residents in proper roof construction and rebuilding. Sau applied for help, and soon had new hope for the future.
“There is new light in my life,” she said.
Sau’s older sister gave her a plot of land, and Sau received a loan and donations totaling US$1,800 from Habitat Vietnam and its finance partners.

A Global Village team of volunteers from Habitat for Humanity Greater San Francisco arrived in May 2011 and helped Sau and her family build a new brick home. The house has a living room, two bedrooms, a toilet and tile floors over concrete. A gutter runs along the edge of the roof to collect rainwater for use. Wall and foundation bracing will help strengthen the house against storms and strong winds. 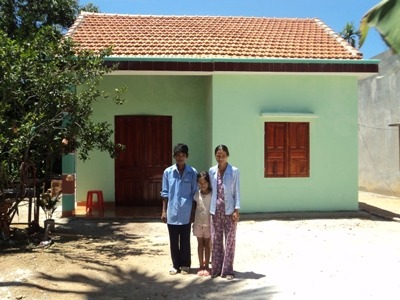 ‘Come to my house’
Sau and her family have lived in their new house for more than 18 months and have a newfound sense of pride and happiness.
“The house is warm in winter and cool in summer,” she said. “It is very spacious and well-ventilated. I feel secure living in my house. I no longer have to take shelter in other people’s houses when it rains.” 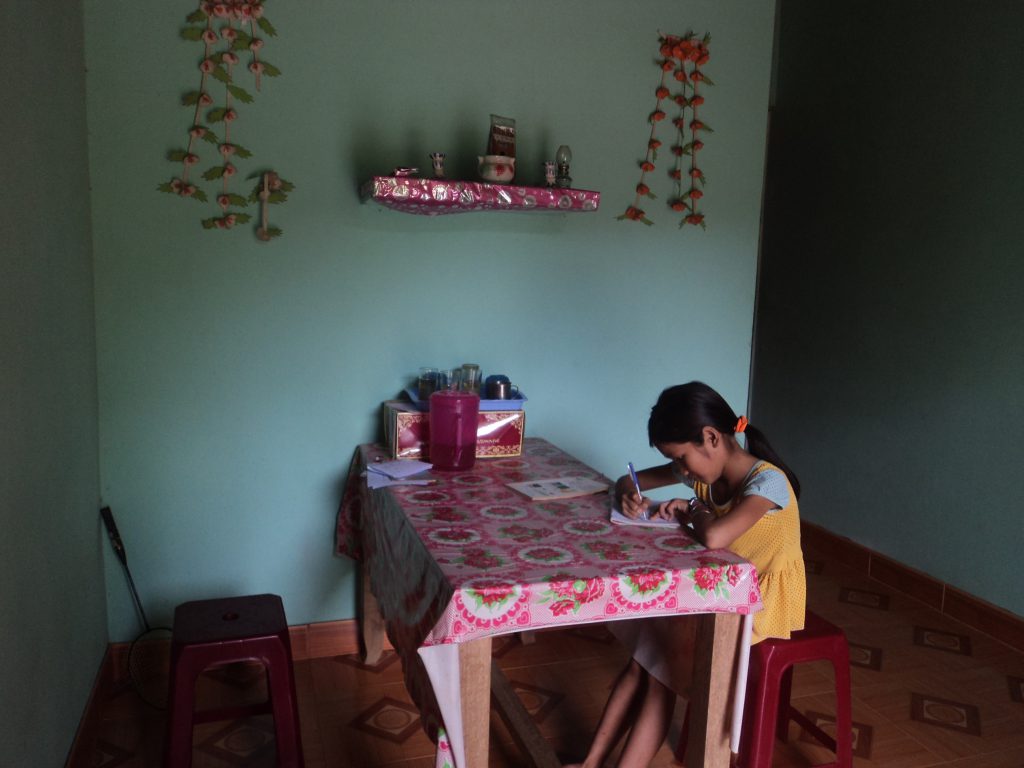 Kim Huyen, 10, does homework at the dining table in the Habitat home where she has lived for the past 18 months.

Sau has rheumatism, and her husband suffers from asthma, but they have already seen improvement in their health. They are now able to work longer hours and are planning to save the additional income for expenses such as medical bills.
For their daughters, a secure house means less worry and more time and space for studying. In recent months, Sau said, the girls have won certificates for earning good grades in school.
Their youngest daughter, Huyen, sees an additional benefit.
“I now tell my classmates and friends that they should come to my house on rainy days because it will be safer,” she said. “I love my house. I feel safe to live and study here.”

Credits to Habitat for Humanity