The first 26 out of 85 houses have been completed and handed over to the marginalized families in Tan Hoa commune, Tan Thanh district, Ba Ria Vung Tau province on June, 16, 2015.
After nearly seven months of joint effort, it was delighted for Habitat for Humanity Vietnam and POSCO Vietnam to celebrate the initial success of the “Vietnam POSCO Village”. Attended the festivity were also the twenty six home-partners, representatives from Tan Thanh district Communist Party, Vung Tau Union of Friendship Organizations and Tan Hoa district People’s Committee and community members. 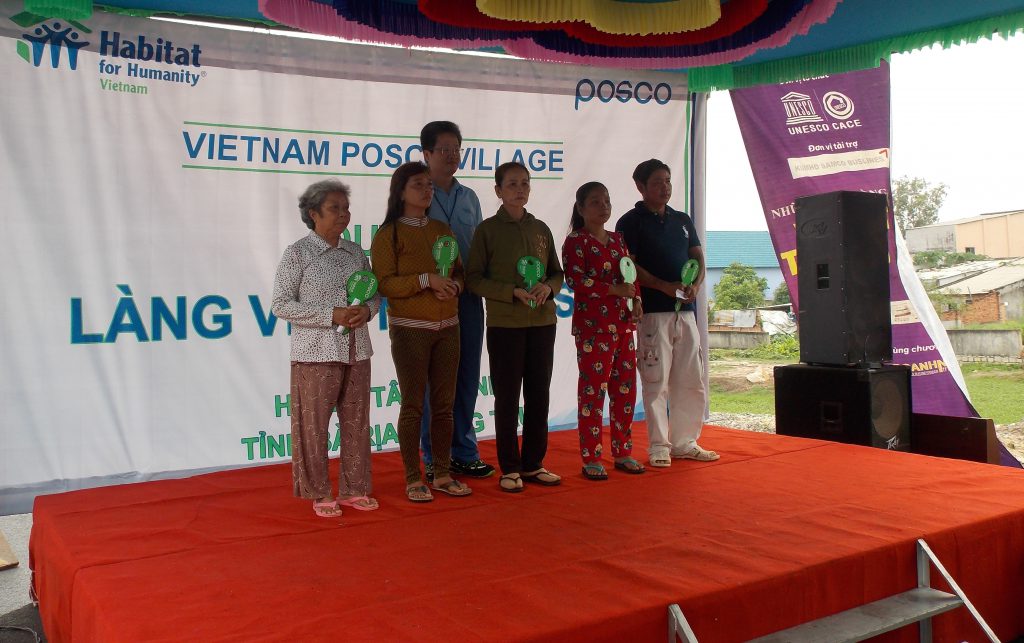 Mr.  Yun Yang Su, General Director of POSCO Vietnam, representing the donor and the home-partners at the ceremony.

Mrs Dang Thi Nhan, one of the 26 home-partners, turned into tears as seeing the dream of her life has come true. Before, her family of 5 adults and 1 child had to live in a cramped old house on borrowed land. As the house didn’t have sufficient place for sleeping, her son often spent the night at somebody’s house. Whenever it rained, water easily leaked through the rusted roof and damped the soil ground floor. Now that holding the key of the new house, Mrs Nhan was relieved that her family wouldn’t be bothered by those distresses anymore.
“My husband and I are old. We don’t care much about ourselves but we worry about our son, our daughter-in-law and our grandchild. It is struggling living in a tiny house. We don’t how we can build a new one while our monthly income can barely make ends meet. That’s why I was so overjoyed that I couldn’t sleep for weeks since I’ve heard about the good news. We are deeply grateful to the donor, Habitat Vietnam and the local authorities for this support.”
Not only Mrs Nhan feels blissful but so do the participants of the ceremony.
“Thank you Habitat home-partners for trusting Habitat for Humanity Vietnam and partnering with us”, said Ms. Truong Thi Ngoc Anh, Resource Development and Communications Manager of Habitat for Humanity Vietnam, “We hope that you will find that these houses shelter you from the unkind weather and host many future happy family moments”. 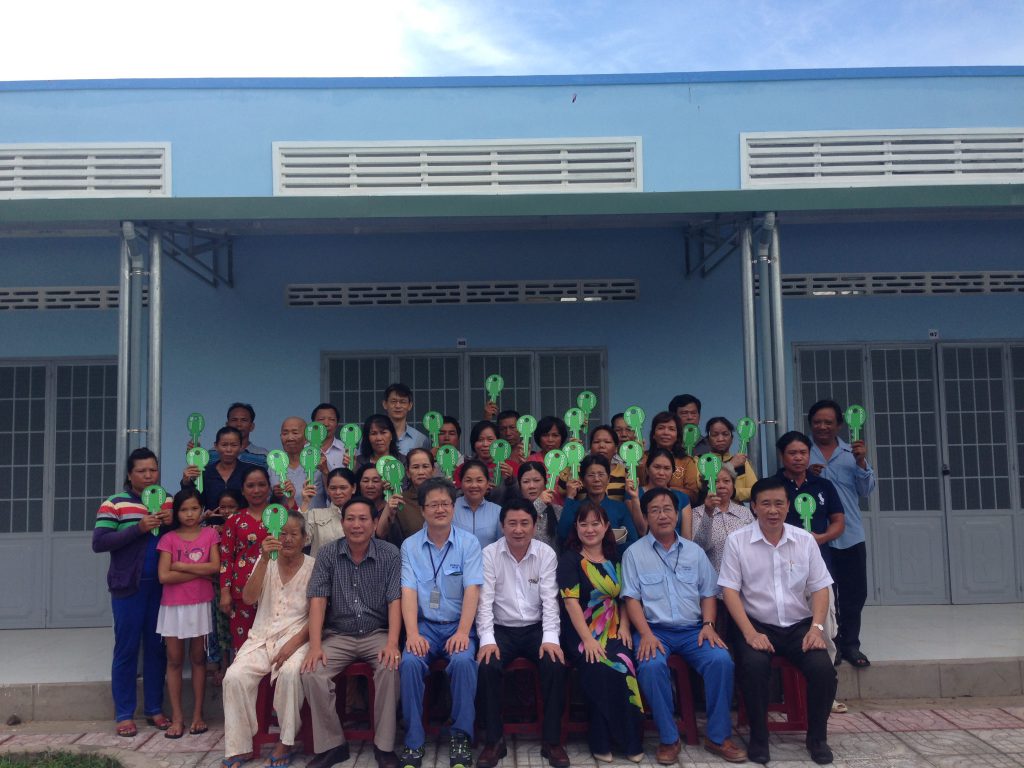 The local authorities, the donors, representative of HFH Vietnam and the home-partners at the ceremony.

Joining with Ms Ngoc Anh in congratulating were also Mr. Yun Yang Su, General Director of POSCO Vietnam and Mr Ngo Hung Dung representative of the local partners. They both sent congrats to the home-partners and wished this would be a start for them to escape the cycle of poverty.

According to a provincial survey undertaken in 2009, 87 percent of Ba Ria-Vung Tau’s 253,645 houses is inadequate and substandard. Among those are the households who are living in informal settlement by the river or canal in Tan Hoa commune. That is where the initiative of the Vietnam POSCO Village came out. With the commitment of “building the community into which we work”, the ‘home-builder’ POSCO has partnered with Habitat for Humanity Vietnam to assist those prioritized families to move into decent homes. Moreover, the project has received an enormous support from the Government who provided land for this resettlement project.
Mrs. Dang Thi Nhan with her big smile opens the door for the first time.

Being compliant with the Habitat for Humanity Vietnam’s housing standard, each house has the area of 65 square meter which is ample for one living room, two bedrooms, a kitchen and a built-in toilet. 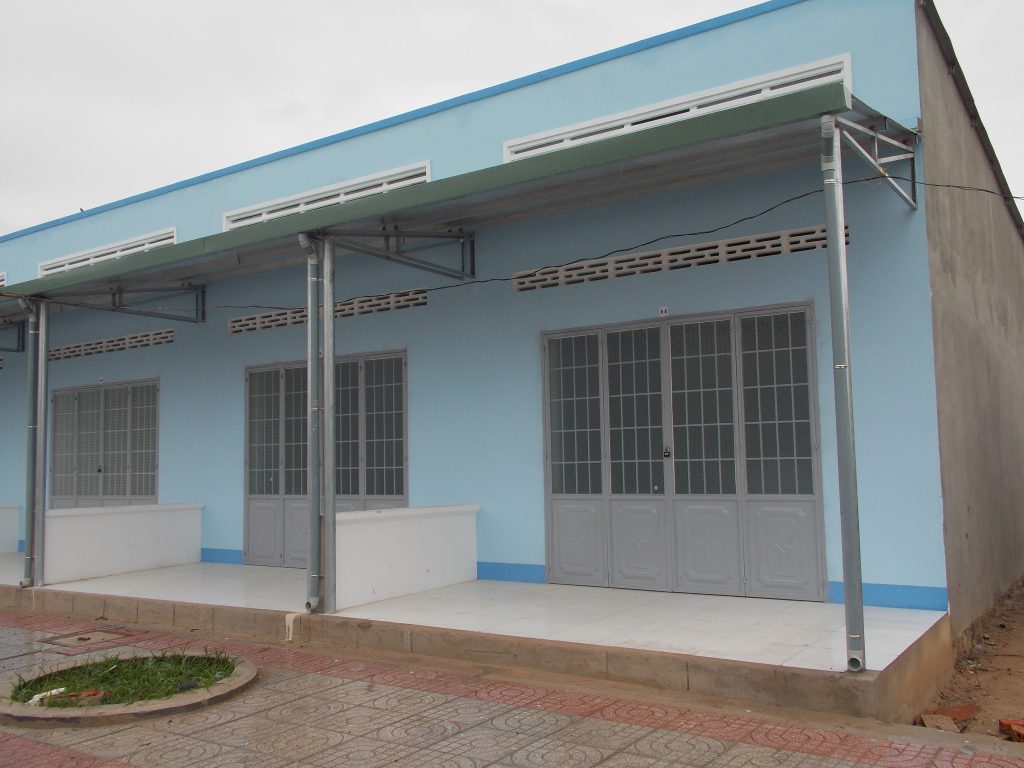 The project was kicked off in November 2014 with the funding from POSCO and donation from their employee. Besides, the Korean steelmaker corporate supported over 100 Korean volunteers and 20 Vietnamese students to build at Habitat construction site in January.
The 18-month project will continue to provide the other 54 households with adequate housing, water and sanitation facilities from July 2015 to February 2016. Aside from provision of technical expertise advice to families building home, Habitat for Humanity Vietnam will help strengthen livelihood prospects for the families through community development.